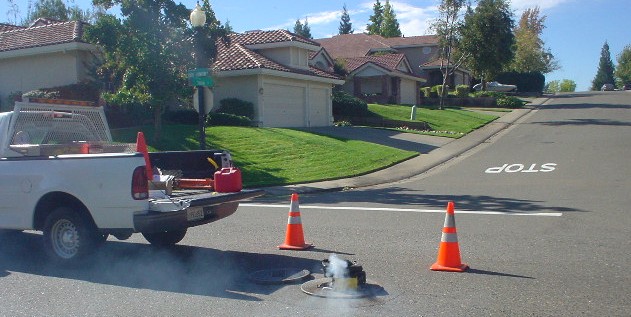 The city has been testing and upgrading our sanitary sewer system over the past 10 years. We are taking action to address damaged pipes, improper private sewer construction, and illegal connections to the sewer that offer an easy route for storm water or other non-wastewater discharges to enter the sanitary sewer collection system. Non-wastewater flows entering the sanitary sewer collection system take up valuable capacity, which could potentially cause raw sewage spills, and cost extra money to treat and convey.

The city implemented a comprehensive program to evaluate and maintain the sewage system and make repairs as they are discovered. Several different operations are used to evaluate the system, including:

Smoke testing is a simple, cost effective way to locate sewer problems with little disruption to the system or residents. This method tests the city-maintained mainline and the integrity of the laterals. Smoke testing has been used extensively to locate defects in sewer systems nationwide.

Smoke testing maps will be posted on this page when testing is scheduled.

City crews will conduct the smoke testing to locate breaks, defects, and illegal connections in the sanitary sewer system. Smoke testing requires the opening of manholes, which are located in the streets, utility easements and/or alleys.

Once opened, a blower is placed on top of the open manhole, which forces a nontoxic smoke into the system. As the smoke is forced through the sewer lines, it will be forced from any openings or defects in the system, as shown in the diagram above.

The white or gray smoke exiting the system is easily observable by the field crews performing the test, who will log each occurrence. Each of these occurrences will be mapped and analyzed. 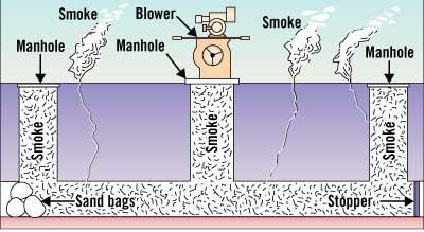