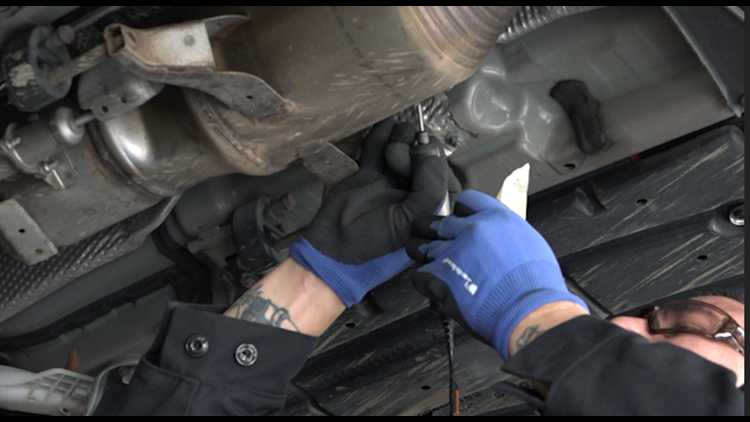 Catalytic converters have become a hot commodity for thieves because of their value, relative ease to steal (unbolt or cut out), and lack of identifying markings. The lack of identification makes it hard to identify victims and successfully apprehend and prosecute criminals.

Thieves take stolen catalytic converters to metal recyclers. The recyclers will pay up to $250 per converter for the precious metals inside them. Victims, however, will pay an average of $1000 (or their deductible) to replace it.

While any vehicle manufactured after 1974 can be considered a target for catalytic converter thieves, the most targeted vehicles are typically:

Trucks and SUV's - Because trucks and SUVs are higher off the ground, thieves do not need to jack the vehicle up to slide underneath and remove the catalytic converter.

Light vehicles - Lighter vehicles, such as the Toyota Prius are a target vehicle because they can be quickly jacked up off the ground to remove the catalytic converter.

Auto Dealer Lots - Auto dealer lots are targets, especially at night when thieves may target lots of vehicles in a short period of time. Some lots have reported having as many as 20 catalytic converters stolen in one night.

The Folsom Police Department has partnered with local auto mechanics for its Etch and Catch program.  The Etch and Catch partners will etch your vehicle's license plate number and use heat resistant paint to paint identifying information on your catalytic converter for free while they conduct any vehicle maintenance that may have your vehicle up on a lift.

Find an Etch and Catch Partner